If UFOs are real and trying to get our attention perhaps they are getting a little more savvy about the way we humans work.

A new video has emerged purporting to show ‘a mothership and its fleet’ zipping around in the clouds above a BBC building in West London.

Perhaps the group of intergalactic travellers was hoping for some coverage from Auntie. 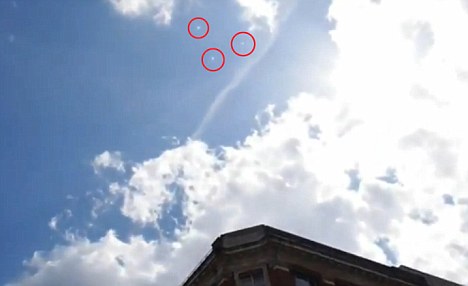 UFOs? In the video, three fast-moving white dots streak across the London skyline 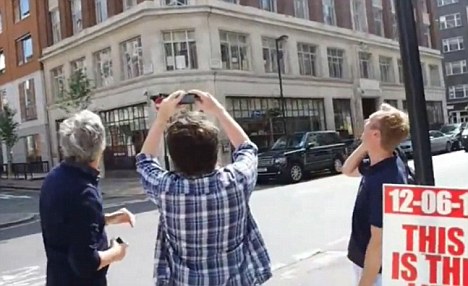 Crowd puller: By the time the cameraman arrives on the scene there are already three other people observing the ‘phenomenon’

Instead they were caught on camera by a passer-by, and at least one other person who can be seen filming or taking pictures on his camera phone while the video is filmed.

In the video, the cameraman runs towards the corner of Bolsover Street and Clipstone Street where two other men are already standing, gazing skywards, one of whom is using a mobile phone camera.

As the camera is pointed upwards, over the BBC’s Yalding House, three white dots flash across the sky at great speed in a triangle formation, they are very quickly followed by two similar sized white dots.

As the camera pans down again, two people on the opposite side of the road can also been seen watching events unfold above them.

Then one larger, bright and more slow moving disc-shaped white object appears, circles around briefly and zips off. 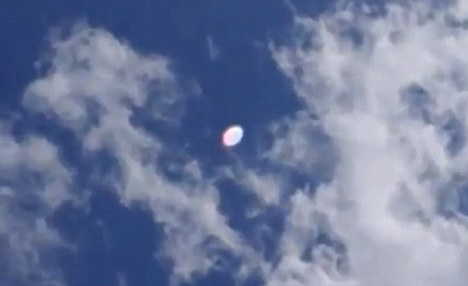 Mothership: After the five white dots are seen whizzing around, one larger brighter disc-shaped white object movers around slowly in the sky

By this time a crowd of five people have gathered on the street corner to observe. A Scottish man’s voice is heard off camera saying the word ‘UFO’.

Shortly after another Scottish man’s voice is heard saying: ‘Are you getting that up there? I couldn’t see before because the sun as flashing by.’

Far be it from us to suggest that the video is a hoax, but were people so minded then that part of London is home to a great many production houses offering both the expertise and facilities to mock up a convincing video.

Another similar video posted by alymc01 appears to have been filmed from the office of The Mill, a company which creates visual effects for the film industry.

But as the person who circulated the footage wrote in order to circumvent the cynical naysayers: ‘If you believe it’s easy photoshopped why don’t you make a video & show us all.’ 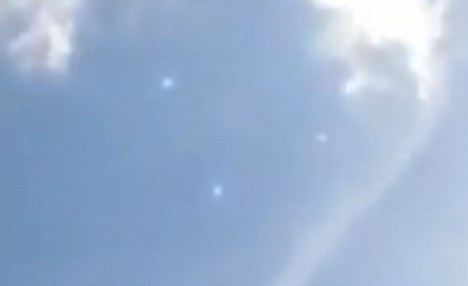 Close-up encounters: The three white dots that appear at the beginning of the video

The video was originally uploaded to YouTube by 31-year-old user alymc01, but it has been more widely circulated by a user called EllasVirgo, who on his YouTube profile describes himself as a farmer from Australia.

Virgo’s YouTube channel is filled with space, asteroid and UFO-related snippets, including videos with titles such as ‘More proof Nasa is lying’.

‘Right – took over a week to get it….but finally managed to get these critters on camera on a clear day, and even get a close-up

‘Can anyone explain what on earth these lights are please?’

The video was uploaded on June 26 and, given that Virgo says it took more than a week to source, and that he states in the description that it was shot on a Friday in June, the film was made on either June 3, 10 or 17.